Chaplaincy to the Chinese Diaspora in Ireland 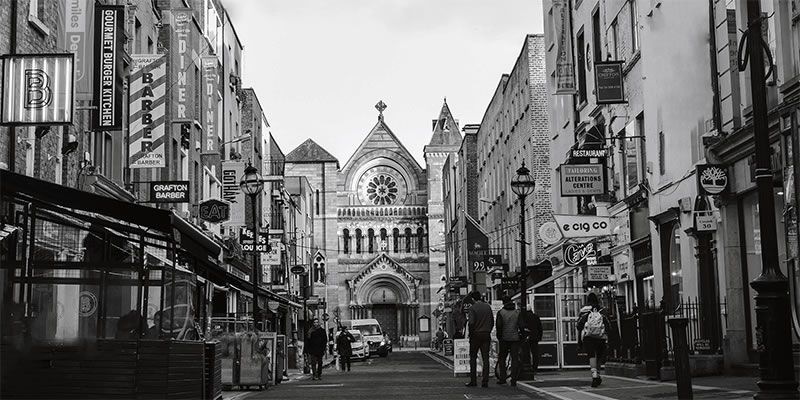 Irish missionaries have a long history of leaving their footprints in many countries worldwide. When I returned to Ireland some years ago, I responded to the promptings of the Spirit to reach out to the Chinese community in Dublin. I had worked as a missionary with the Chinese in Hong Kong for over 40 years, and so I was familiar with their culture, language and customs.

Most of them were students but some were restaurant workers and others, casual workers in various places and of course, some were illegal migrants. My first call to mission that time was an invitation to visit and befriend the Chinese illegal immigrants in Dublin’s Mountjoy Prison. This was a very special mission and a much-needed ministry entailing regular visits.

At the time, there were seven young priests from China studying in the national seminary in Maynooth, sponsored by the Columban and Jesuit Fathers. These priests used to celebrate a Mandarin Mass twice a month in Myra House on Francis Street in innercity Dublin with a small group of Chinese lay people and a few Legion of Mary members in attendance. For me, this was very symbolic. Myra House was the home of the Legion of Mary. It was here that the Legion was founded in September 1921 by Frank Duff.

Frank Duff had a great love and appreciation of China. The Irish Columban Missionary, Fr. Aedan McGrath, spread the Legion of Mary over the vast country of China in the mid-twentieth century. Many young Chinese legionaries gave their lives for the Legion because they refused to sign a document saying the Legion was a “subversive organization.” So, when I attended the Chinese Mass, I imagined Frank Duff smiling down on this fledgling Chinese community in gratitude for an unexpected blessing for Myra House and the Legion.

At this stage, my dream of setting up an outreach to the Chinese community became very real, and I discussed it with the Chinese group. They were very excited and saw it as a great need and offered to help me in whatever way they could. I approached the Archdiocese of Dublin for permission and support. The Vicar General, Monsignor Lorean O’Brien, was very interested, supportive and willing to help in any way he could. A plan of action was approved by Archbishop Diarmuid Martin, with the remit that I find a Chinese chaplain from among the group of Chinese priests completing their studies in Maynooth. Fr. Anthony Xiao offered his services and obtained the necessary permission from his bishop in China. He was sponsored by the Archdiocese of Dublin, becoming the first Chinese chaplain to the Chinese community in the city. Our first base was Corpus Christi Church, Drumcondra.

It never ceased to amaze me how many young Chinese adults were eager to join our catechumen class. I asked one of them why she was interested in becoming a Catholic here in Ireland. She told me, “Sister, here we are free to follow Jesus.”

I became the liaison person between the Diocese and the Chinese community. We set up a small team of Chinese and Irish volunteers under Fr. Anthony’s leadership to help us get our project off the ground, keeping evangelization as the main focus of our mission. At this time too, Sr. Lucia So, a Chinese Columban Sister from Hong Kong, was assigned to Dublin to help this young community. Fr. Anthony, Sr. Lucia and Anita, a committed laywoman from Hong Kong and longtime resident in Ireland, formed the first pastoral council. Their mandate, evangelization, was high on the agenda and was very evident in all of their outreach work.

The bi-monthly Masses continued in Corpus Christi Church and soon the community began to grow. A catechumen class was organized and received an amazing response. We had an average of twenty young Chinese adults baptized every year at the Easter Vigil Mass in Dublin’s Pro-Cathedral. Archbishop Martin was delighted with this blessing of new life in the diocese. It never ceased to amaze me how many young Chinese adults were eager to join our catechumen class. I asked one of them why she was interested in becoming a Catholic here in Ireland. She told me, “Sister, here we are free to follow Jesus.”

After five years Fr. Anthony was recalled by his bishop to his home diocese in China. He was replaced by Fr. Anthony Hau, a young Chinese priest nearing completion of English language studies in Dublin. About this time, we began to search for more space for meetings, classes and social gatherings than Corpus Christi Parish could supply. We decided to approach the diocese again to request a more permanent place with more facilities – a place that would be a home-away-fromhome for our growing community.

The Diocese graciously responded to our request and arranged for us to move our chaplaincy to St. Andrew’s Church in Westland Row. This offer was way beyond my expectations. Apart from the lovely church in a very convenient central location, there is lots of extra space for spiritual and social gatherings as well as comfortable accommodation for Fr. Anthony.

Fr. Anthony is a hard-working and dedicated chaplain. Our group has quite a number of young children as we have had lots of marriages in recent years. The community is now well settled and catechumen classes and faith-sharing gatherings continue as well as aftercare for the newly baptized. We have a committed Chinese Pastoral Council and a Chinese choir. So, we are well integrated into St. Andrew’s Parish and the Archdiocese of Dublin. I will be eternally grateful to God for this special mission to the Chinese here in Ireland. It seems like my Columban missionary call has come full circle, and my faith has been truly enriched through this meaningful outreach to a great group of people here in Dublin.

Columban Sr. Mary Greaney is from Galway, Ireland. She worked in Hong Kong as a nurse for 40 years. She also worked with prisoners and was very active in the Legion of Mary. Since retiring to Ireland she as been working with the Chinese Community in Dublin as well as visiting Chinese people in prison.