The Southeast Asian country of Burma was one of the early nations apart from China where the Columbans established a mission in 1936. Unfortunately, the xenophobic Burmese military dictatorship kicked out the last Columbans from that country in 1979.

By 2003, nearly a quarter-century had passed since this expulsion, and much had occurred in Burma, including the change of the country’s name to Myanmar.

The Catholic Bishops of Myanmar asked the Columbans to provide staff members for a new missionary seminary that they had started in the capital of Yangon.

In 2003, two Columban Fathers returned to Myanmar to teach English and philosophy there. In 2004, several more Columbans joined them, and the Columban Sisters later established a presence in the northern city of Myitkyina, along with several Columban lay missionaries.

As Myanmar gradually opens up to the world after decades of isolation, the Columbans will continue their important work there. 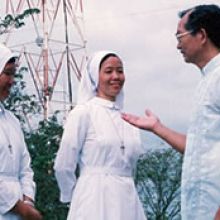