The Korean War, to which many in the United States refer as the “Forgotten War,” was six decades in the past by 2010, although the paranoid rogue state of North Korea still served as a chilling reminder of the conflict.

Tens of thousands of U.S. troops died in this horrific war, along with untold hundreds of thousands of Koreans and Chinese. Tragically, the Korean War’s bloodshed also affected the Columban Fathers.

In the summer of 1950, invading North Korean troops took as prisoners of war three Columban Fathers: Philip J. Crosbie, Francis J. Canavan, and Thomas Quinlan, the latter of whom would become a bishop.

In October 1950, the North Koreans forced these three Columbans and hundreds of other prisoners of different backgrounds on a brutal “death march” to a prison camp in the north.

Father Canavan died of exhaustion on this march, and Fathers Crosbie and Quinlan would languish in the North Korean prison for nearly three years. Father Crosbie documented these events in his 1955 book March Till They Die.  In some countries this book’s title was Penciling Prisoner or Three Winters Cold.

The Korean War took a harsh toll on the Columbans; in addition to Father Canavan, six other Columban Fathers were killed by North Korean troops or died in North Korean prison camps during the war.

In October 2010, the Columbans commemorated the 60th anniversary of the Death March, as well as all Columbans martyred in Korea, with a ceremony at Dalgan Park, Navan.

About 100 people attended this memorial ceremony, including relatives of some of the Columban martyrs, and the South Korean ambassador to Ireland.

Three years later, the Columbans would release the film Born in Each Others’ Pain, part of which paid homage to the Columban martyrs of the Korean War. 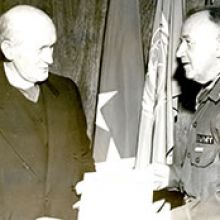