By 2013, the Columbans had continuously maintained a presence in Korea for 80 years. Throughout this time, the Columbans endured a great deal of trial and tribulation, as well as enjoying much success.

In commemoration of the 80th anniversary of their mission in Korea, the Columbans released the film Born in Others’ Pain.

The movie discusses the Columban Fathers who were martyred in Korea, the imprisonment and persecution of Columbans by repressive regimes in North and South Korea, the Korean War, and other related subjects. I

t also features interviews with the Columban Fathers who served in Korea, and the lay people who worked with them. Born in Others’ Pain is a commemorative film which recounts the fascinating story of the Columbans in Korea. 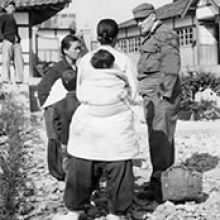