On November 23, in the year 615, in the town of Bobbio in northern Italy, Saint Columban (also known as Columbanus), passed into eternal life.

The Irish-born Saint Columban, who was a prominent missionary leader in the early Middle Ages, gave his name to the missionary society founded by Bishop Edward J. Galvin and Father John Blowick.

In 2015, the Columbans, along with many others, prepared to commemorate the 1400th anniversary of their namesake’s death.

Articles appeared in various editions of the 2015 Columban magazines from Ireland, the U.S., Australia, and elsewhere, discussing the life and times of Saint Columban. Columban Fathers such as Derry Healy wrote about Saint Columban’s historic achievements, including the founding of numerous monasteries in various parts of Europe, including modern-day France, Switzerland, and Italy.

Other commemorations took place, including the Irish government issuing a stamp in honor of Saint Columban.

As the Missionary Society of Saint Columban prepared to celebrate its 100th anniversary, Society members paid homage to the great saint who paved the way for their work. 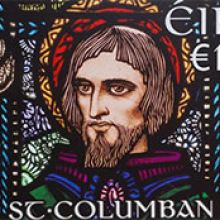