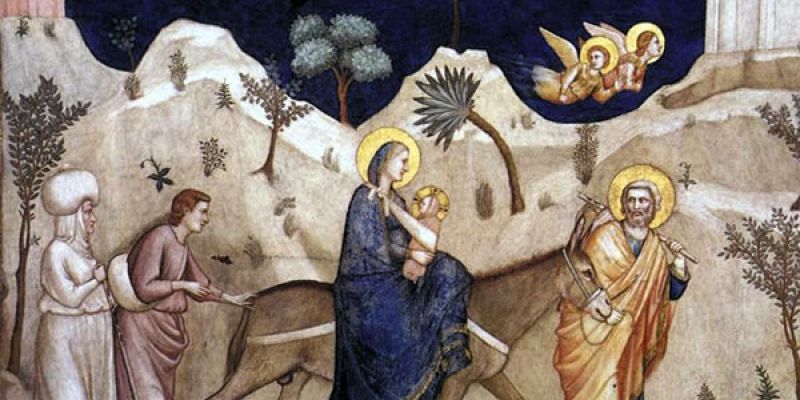 Immigrants and refugees, just like Joseph, Mary and Jesus, do not want to leave home and familiar surroundings.

Joseph got up, took the child and his mother, and left that night for Egypt, where they stayed until the death of Herod. (Mt: 2.14) The image of Joseph, Mary and Jesus sitting in the shade of a tree with their donkey tethered to a branch outside some Egyptian town all those years ago is repeated almost daily in newscasts. The plight of Syrian, Iraqi, Libyan and African families fleeing for their lives across water, desert and mountain with a few belongings is reminding us that little has changed for millions of men, women and children. Daily we see the terror in their faces as they scramble aboard rickety boats, reach a Mediterranean beach and then a border crossing secured by military armed with assault rifles.

It is hard to accept that 2,000 years after the flight of Joseph, Mary and Jesus into Egypt that people are running for their lives from the same part of the world today. But more disturbing is the impotence of present world governance to prevent this from happening. Never are there more resources at the disposal of governments to accommodate desperate people who have to flee. Yet, with some exceptions, the application of these resources is found wanting in responding to basic human shelter and safety.

When it comes to making resources available in preparation for war there seems no shortage or lack of military management. And it is precisely the misuse of these military and associated corporate resources initiating and maintaining war and conflict that are causing the human deprivation we see on the faces of people today. How come the management expertise evident in military expeditions cannot be used to manage human desperation, the residue of war?

The present exodus from the Middle East and Africa didn't happen overnight. It was predicted years ago by Susan George in her book, The Debt Boomerang. While great progress has been made over the latter half of the last century and in the early years of this century the care of the weak and the dispossessed has become an irritant. Frequently, tabloid media headlines highlight the weak, the immigrants, and the refugees as swarms of scroungers.

Immigrants and refugees, just like Joseph, Mary and Jesus, do not want to leave home and familiar surroundings.

They are animalized, corralled in "jungles" of despair, treated with indifference at the drawbridges of European fortresses. Europe has developed a sanitized memory of its post and pre-war exodus of people looking for safe havens around the world. Echoes of the pre-second world war Evian conference are heard around Europe today as nations threaten to close their borders to those seeking refuge.

As long as that continues to happen the flight into Egypt is never old, always new. How do we respond as we commemorate that event? So Joseph got up, took the child and his mother and went back to the land of Israel. (Mt: 2.22)

Columban Fr Bobby Gilmore has worked for many years in the Migrant and Refugee Apostolate in Ireland.