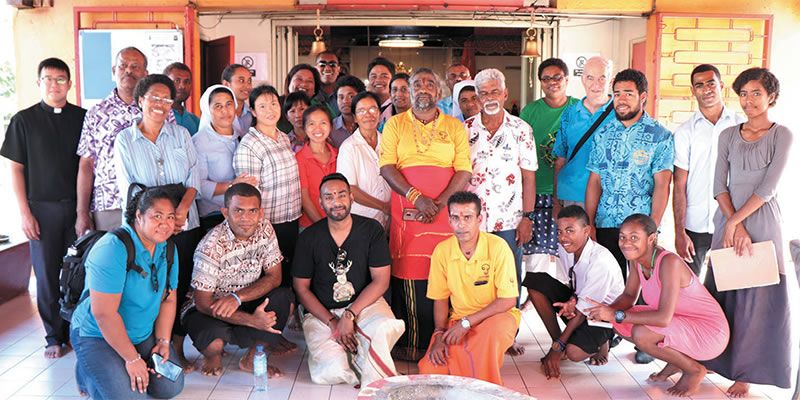 The young people of the Pacific are the ones who have contributed least to planetary destruction, but they will suffer its consequences sooner and more than those who are most responsible. They can expect massive cyclones to destroy their villages, damage their coastlines and traumatize them greatly. Many will see their crops rot through floods or shrivel up because of drought. Some will be expelled as climate refugees from their low-lying islands by rising sea water. Their voices must be heard and heeded.

Our Columban interreligious dialogue (IRD) desk has been organizing sessions for young people of different religions in Suva, Fiji, every two months. When we were struck by COVID in March 2020 and by the Delta strain in March 2021 our efforts at interreligious dialogue came to a standstill initially as we focused on this unknown enemy. Later ZOOM allowed us to resume discussions.

An even more dangerous threat is growing silently in the wake of coronavirus – the climate crisis. The world’s temperature could rise by a disastrous three degrees centigrade by the end of the century because of the carbon dioxide, methane and other gasses belched into the atmosphere by transport, agriculture, and industry. Political and industry leaders will have to make radical and decisive cuts to carbon emissions. We all must change our lifestyles to live more lightly on the planet.

The IRD youth leaders and Catholic Tertiary Association leaders agreed to participate in two webinars to raise awareness. Our webinars featured a one hour BBC film - Climate Change: the Facts. Following this we presented nine, three minute videos from various faith groups highlighting the miracle of nature and aspects of environmental damage.

The Arya Samaj Hindus made a strong plug for vegetarianism. Methodist youths took us on a virtual sight-seeing trip through their newly planted garden. Seminarians from the Pacific Regional Seminary highlighted the value of mangrove forests as a protective eco-system. A young Catholic wrote a poem counterpointing each of the seven days of creation with parallel human damage done. However the pearl of the presentations was a beautiful classical dance representing the wonders of creation by a colorfully dressed South Indian lady.

The call to respect and protect God’s creation is common to all religions and so is an ideal task for cooperation by religious communities. Different religious perspectives can inspire and challenge us. Religious diversity brings out the magnificence of God’s creation and God’s love for all humanity.

Young people today are facing a frightening future. They will experience the cost of the greed and denial of older generations. Those who have lived longer have not shown wisdom. They have abused the earth, seas, atmosphere and flora and fauna for their immediate satisfaction with no thought for the destruction of the web of life. We all must listen to Greta Thunberg and the millions of school children who have been demonstrating for life.