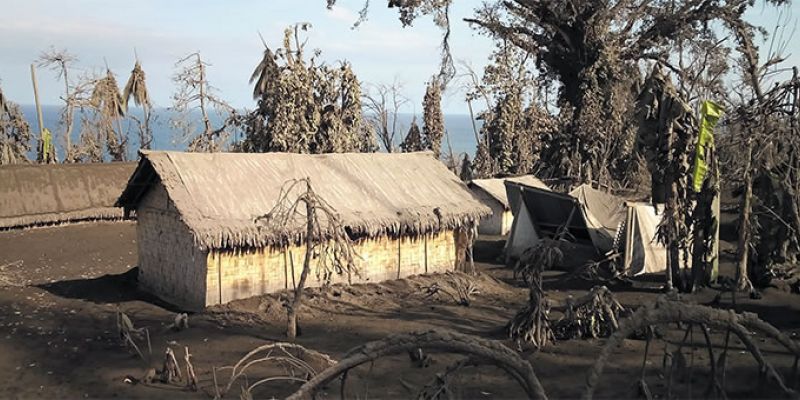 The Pastor of Bali Hai

Chased from his parish by a volcano! That is the story of Fr. Laurence Lulkon. Little did I think when I taught Laurence as a seminarian in Fiji that I was preparing him to deal with volcanoes.

Fr. Laurence is the parish priest of Lolopoepoe parish on the Island of Ambae in Vanuatu, which is located in the South Pacific. There were about 12,000 people on Ambae, and their quiet lives were shattered on September 16, 2017, when the Marano Voui Volcano erupted.

Ambae is better known internationally as Bali Hai. From the nearby island of Santo (site of the U.S. Navy during WWII) Ambae can be glimpsed covered with cloud and volcano smoke. It is said that J. A. Michener, author of Tales of the South Pacific based his island of Bali Hai on Ambae.

Just before the eruption, the signs were so bad that the Vanuatu government declared a state of emergency and ordered a complete evacuation of all twelve thousand people on the island. Lolopoepoe was one of the ports of evacuation so thousands poured into the mission, and Fr. Laurence had to help with food and water as best he could. He himself was the last to leave. He said the people wept as they left and continued weeping until the island disappeared from view. Their way of life and their culture were in ruins.

People were evacuated to different islands. Fr. Laurence went with those going to nearby Santo. From there he was able to fly to the island of Maevo once a month to celebrate Mass and minister to the Ambae people who were there.

The people of Bali Hai were subsistence level farmers and lived from their gardens and their plantations. In their plantations they grow kava, a plant that is made into a popular drink. This with copra and coco is their main source of income.

By the end of 2017, the state of emergency was lifted and people started returning to Ambae. Their hopes were dashed by another eruption on April 9, 2018, at 9 p.m. The next morning became like night for three hours, and people had to use torches during this time. Ambae was covered with ash, and life became impossible. Many children developed asthma. Some roofs collapsed from the weight of the ash which also did much damage to the trees and shrubs. Rivers were poisoned. Yet, the root crops survived and this helped keep the people alive. Replanting became impossible though because of the ash. It seemed like the end of Bali Hai.

I remember Bali Hai. I visited Lolopoepoe in 1993 for the ordination of another of my students, Fr. Celestine Tari, a native of the parish. Fr. Celestine now works in the Marquesas, near Tahiti. The late Bishop of Vanuatu, Msgr. Michel Visi, my one-time colleague at the Fiji seminary, was from the other parish, Nagnire, in the island. This is even closer to the volcano and now completely uninhabitable. Ambae was a vibrant, bright, green tropical paradise back then.

The state of emergency ended on November 26, 2018, and the government lifted the complete ban on Ambae. Some people returned again. They were concerned for their homes and gardens. The cattle and pigs had done great damage to the gardens. Some people have tried to repair their homes and replant. The diocese allowed Fr. Laurence to go back to Lolopoepoe. He returned in January 2019. He travels about on foot and by boat. The roads have been destroyed by the landslides that are everywhere and by the heavy rain. Sometimes, he told me, he has ten people for Sunday Mass. Drinking water is scarce. Two schools are functioning. Lolopoepoe primary school has just about 100 children. It is almost impossible to run primary schools under these conditions.

Most people have now tried to make a second home elsewhere. A group of visiting Australian scientists recently advised those still on Ambae to leave as they saw no future for them there.

For those who try to stay on Ambae, Fr. Laurence says, there are enormous challenges. Their livelihood is gone. Most of their family is elsewhere. There are no more Sunday services. And they do not have the support of their culture. At the moment there are no public services to Ambae, no planes where once there were three airstrips, no banks, no public works or education department. But the Pastor of Bali Hai is determined to stay. “The people feel happier and more secure when they have a priest with them,” Fr. Laurence says. He finds that a priest has an important role and task listening to and accompanying the peoples in such a desperate situation. He sees himself staying on as the “Pastor of Bali Hai” as long as life is at all possible there. 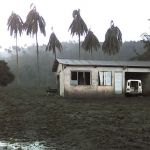 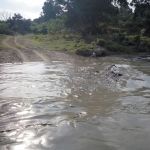 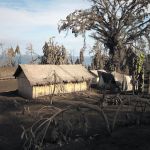