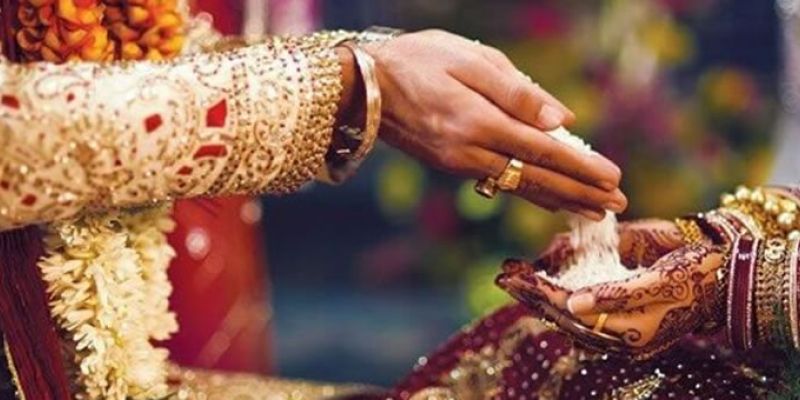 December, January and February are the wedding months. All the Parkari parishes here are busy attending weddings and being involved in some of the preparations. The wider Sindhi society is much the same. There are weddings on the move constantly.

We are called to witness and bless the beginning of each process. About eight days prior to the wedding the young woman and young man are put through rites of passage. We are asked to come and bless the symbols being used and then place the young man or young woman in a space where they contemplate on their future. The young person is blessed. Mass is said. The catechist has an opportunity to speak on the Christian understanding of marriage. The mother of the young person performs the setting apart rites.

Rice, a coconut, a special green cloth, red colored liquid and water are the natural symbols used. A holy picture is also given. We use the prayer of St. Patrick to invoke God’s protection on the young person. This ancient Irish prayer is close to the Parkari understanding of the spirit world. We use two big colorful pictures of creation of the world for people to see. People are very receptive to the atmosphere. It’s a time for tears too for the bride to be as she prepares to step out of the security of her parents’ home into the unknown world of her husband’s home. Normally the parents of both young people will have decided everything about the marriage. The young person does have some say.

From then on the wedding preparations take on a life of their own. When the parents approach shopkeepers to buy what’s needed, they fi nd that the shopkeeper knows all that’s needed. Mostly the shopkeepers are Muslim, but they know what Hindu parents require including Hindu religious items.

Finally, the day of the wedding arrives. It’s a very joyous occasion. The groom’s party arrives. There’s a formal reception with many of the close relatives of both sides seated on the ground. The priest sits with the Catholic party. Sweets are blessed, etc. All seated take the tray which contains rice, the sweets, a cloth for the bride, etc. Each person receives it reverently with the head covered and quietly murmurs a prayer. With the formalities out of the way, everyone relaxes.

Then the special place or Modvoo where the wedding will take place is erected and decorated. The exchange of symbols of the marriage acceptance takes place. A party of chanting women bring those to the groom. He indicates his acceptance by touching each item with a sword. He refuses milk when it is offered to indicate that he wants the relationship to be of man and wife.

Finally he is brought towards the place of the wedding. He must enter a special gateway erected for that purpose. It is the mother of the bride who performs the ceremony of welcome through the symbols. The archway itself has six birds sitting on top indicating all creation witnessing the event. Again the symbol of the water, the coconut and dates are evident. Also one notices a bow and an arrow. The people were originally hunters. This has survived from that distant time.

Finally the groom is seated and ready for the wedding. He is wearing a crown. From his crown, a crown will be taken for the bride. They are the king and queen of creation. Eventually the bride emerges from her home, accompanied by singing women. There’s a joyful atmosphere. The women from both sides are chanting wedding songs. For us Christians, prayers are said, the Gospel is read, a sermon is given and the couple exchange vows and begin their life’s journey together. As the bride and groom walk around the Modvoo, placed in the center is a cross, a candle, incense sticks, and jars of dried dates crowned with portions of dried coconuts. A hymn is being sung and while this is happening, people are showering money on the couple. By this time, the women can’t be contained any longer, and they burst into traditional songs. The atmosphere is at a high pitch. Then the marriage register is signed after the priest formally intones that this marriage is permanent and requests that no one destroy it.

Everyone relaxes after further formalities are observed as the bride accompanies the bridegroom to his side of the compound, amid more ceremonies. Then she is immediately returned to her parents until she departs with the groom’s party.

The people have very precious customs which express who they are. These may not survive as many are becoming urbanized. But for now all is well, and we continue to be privileged to be part of these joyful occasions. These are doors through which we are invited to be part of people’s lives. We take off our shoes respectfully, as the ground we are walking on is sacred.