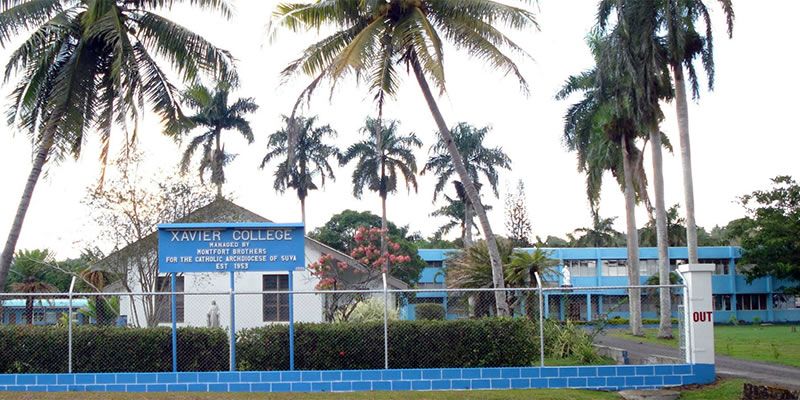 Xavier College was established in 1953 as a boys school by the Catholic Archdiocese of Suva, Fiji, to provide Christian education, particularly to Indian youth in the western part of Fiji and was entrusted to the Columban Fathers at the request of Bishop Foley. The latter saw education, particularly of the poor, as key to the possible conversion of the many Hindus, Muslims and even Chinese in Ba, Fiji, to the Catholic faith. Many conversions did in fact occur, and all who studied there have enormous respect for the Columbans, Marist Sisters and Christianity in general.

The first lesson which started at 8 a.m. on February 12, 1953, was Latin for the duration of 40 minutes, followed by the second class which was grass cutting and then more grass cutting! Father Michael Cryan was the first principal to the 25 pioneering students. He was followed by Columban Frs. Tom Henaghan, Eddie McColgan, Colm McGovern, Tom Daly, Otto Imholte, (Tom Daly, again) and Dan Ahern. Other Columbans who taught there were Frs. Jim Gavigan, Kevin Fleming, Ted Gerkin, Pat O’Sullivan, George Gear, Martin Croghan. Particularly loved by the students was Fr. Vincent Batchelor of Australia, who was a teacher for 10 years and as chaplain for almost 20 years.

In 1970 the college went co-ed, and in December 1987, the Montfort Brothers of St. Gabriel took charge of the College. Now there is a roll of almost 900. The College has excelled in national quizzes and also on the sports field – athletics, table tennis, rugby and soccer.

Xavier had provision for boarders for many years, until around 1980, when the dormitory was turned into a computer room. Boarders came from places like Navala, Vatukoula, Navunibitu, Nadi and Lautoka. Among the students were a number of future priests: Frs. Veremo Dovarua, Lewis Henry SM, Veremo Nayacalevu CM, Jope Senikura SM, and Arthur Leger, SJ, as well as others who work in the local business community, overseas judiciaries and even at NASA! A great friend of the boarders was Ishaq Ali, the man who cooked their meals and made sure he gave them the kind of food they liked - plenty of casava - which was grown in the college garden. He also cooked for the priests and provided morning tea for the teaching staff of the college. In his spare time, he milked the cows in both the morning and evening and did the shopping. According to Columban Fr. Dan Ahern, he was the most generous, selfless person he has ever known. “He wasn’t a religious man; he used to say he left that to his wife!”